How many times have you heard the phrase “You're not a real rider till you can’t remember how many times you've fallen out of the saddle”? 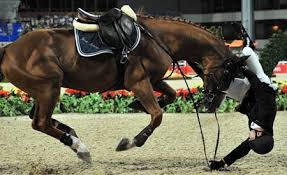 In nearly every sport, athletes are subject to injury, yet in riding it seems to be that head injuries are one of the most common due to the nature of the sport and the ability to fall from 6ft in the air. That's why helmets are crucial to protecting the rider and allowing the rider to continue riding. Helmets are typically designed for impact in a linear motion. When falling off a horse, rarely does the rider land perfectly linear with the ground. Most falls are ugly and without grace. Nor is every fall the same. Based on impact statistics, the angular force of a fall is far more detrimental than a linear fall which helmets are designed for, thus demeaning the average helmet safe, but not as safe as they could be. This is where MIPS comes in, the Multidirectional Impact Protection System. MIPS is a yellow layer added to a traditional helmet that allows for slight movement of the helmet in order to aid the helmet in protecting the rider based on the angular impact of the fall.

The Brain is one of, if not the most critical, yet fragile organ in the body. While the skull protects the brain, the brain itself has the consistency of a hard boiled egg or butter meaning the skull can only do so much to prevent injury and is why helmets are a necessity in the equestrian world where falling out of the saddle is an everyday occurrence  Not only does it have an egg like consistency, the brain is composed of 73% water  making it extremely more vulnerable to rotational/angular impact.

The severity of such impact lies in the fact that not only does it have the ability to cause skull fracture, but concussion, subdural hematoma, and/or diffuse axonal injury(axons in the brain become sheared due to the brain rapidly shifting in the skull).

Where the average helmet goes wrong:

Majority of crash tests for helmets are designed for linear impact, meaning the helmets are tested in a straight downwards fall. Have you ever actually fallen off of a horse and landed perfectly perpendicular to the ground? If you have, that's talent or a phenomenon. If you're like the rest of the world most of your falls occur at a more physical practical angle, making twists and turns upon impact.

The Multidirectional Impact Protection System uses a reality based test whe the helmets are hit with force at various, randomized angles in order to perfect the helmet and minimize brain injury for any fall. The simulation is more accurate and closer to reality than ever before seen in helmet technology. By adding a layer in the helmet that allows the helmet to absorb rotational impact, the helmet is truly doing it’s job to protect the rider from as much injury as possible. Straight from the MIPS team, you can see that each helmet is tested in order to not only meat, but exceed the standards or the average helmet:

“Data is gathered using nine accelerometers inside a Hybrid III crash test dummy head and analyzed using a computer model known as the Finite Element Model. The same helmet model is compared with and without the MIPS BPS to make sure that the helmet passes the strain reduction criteria MIPS have on all approved helmets.”

As a rider in the modern world of competition, there are too many demands of the average athlete to be worrying about security and safety of your safety gear! The last thing a rider wants to worry about is whether they are going to suffer from their dangerous passion in the long run from severe chronic brain damage. Brain damage is unlike any other injury as it manifests internally with little to no external visuals meaning you dont know its there till its too late. Don’t let it be too late. Adapt to the dangers of this sport and protect your body from the harsh impact of falling. You only have one life to live, live it efficiently by staying safe and continuing to ride passionately.

Protection for the Brain-You only have one.
September 01, 2020